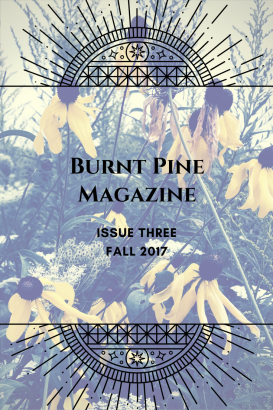 Issue three is finally here! And after much anticipation on our part—and hopefully on yours as well—we cannot wait for you to dive in! They say, “third time’s the charm,” and in some ways, this issue felt like that. Now, we don’t mean to say that issues one and two were busts or fell below expectations, quite the contrary; the skilled and diverse writers we were afforded the opportunity to showcase in our first two issues not only helped us solidify our identity as a literary magazine, but they also contributed to our growing followers and in turn, we experienced our best submission period yet. Yes, at one point we were overwhelmed with submissions, with our little staff of two, but we were ecstatic to become known! We were officially put on Duotrope’s list of magazines to submit to, and we are so grateful for those who shared our little endeavor with their writer friends. And once again, that submission period provided us with an excellent group of writers whose work continues to define us.

That definition has been understood as “literature that burns like wildfire,” but we’ve managed to contain the flames as the issues go on, publishing work that acts as a controlled and rejuvenating burn. We are extremely proud of the collection of work we selected for issue three as it hits nearly every area we, as editors, love. There are stories and poems that call attention to ongoing issues of the female population being sexually victimized and mistreated, the strain between races, and the stigmas same-sex partners continue to battle. You’ll read pieces that will most certainly make you uncomfortable as they highlight this flawed world we live in, yet hopefully they will touch you as they did me, and implore your empathy for neighbors and loved ones alike, who we do not know nearly as well as we like to believe. You will read about the natural world and remember to enjoy and appreciate its beauty, yet respect its power. And there is even a smattering of work that is just plain fun, cute, gritty, or has a mysterious allure we couldn’t quite put our finger on.

Furthermore, issue three has a great mix of new and established writers, and is also dominated by female writers with strong and daring voices we are thrilled to represent. We boast the diversity of our contributing family, as we feel it reflects the entire writing community. Unique and exciting voices whose words supply us with splashes of color to what would otherwise be a very gray world.

The fire is controlled, but ravenous as ever. Take a seat and let it consume you!

“Escape Only” By Sara Mikula

“The Girl in the Water” By Cathy Ulrich

“The Missing Girl” By Susan Price

“The Scent of Gardenias” By Michael Anthony

“To Karaoke is Divine” By Hannah Decker

“What the Stars See” By Alexia Tolas

“After” By Ryan Belcher

“I Found a Tire Mold Too” By Brandon Best

“To Mourn the Living” By Jennifer K. Kowalski

“When the Bubble Meets the Needle: Trump and the Age of Epistemic Closure” By Carter Vance

“Where We Are” By Ryan Belcher

“An Ode to Chartres Street” By James Cummins

“Concerning the morning I would not make love to you” By Jennifer K. Kowalski

“The Miller’s Engagement Photo Shoot” By Jane A. Horvat