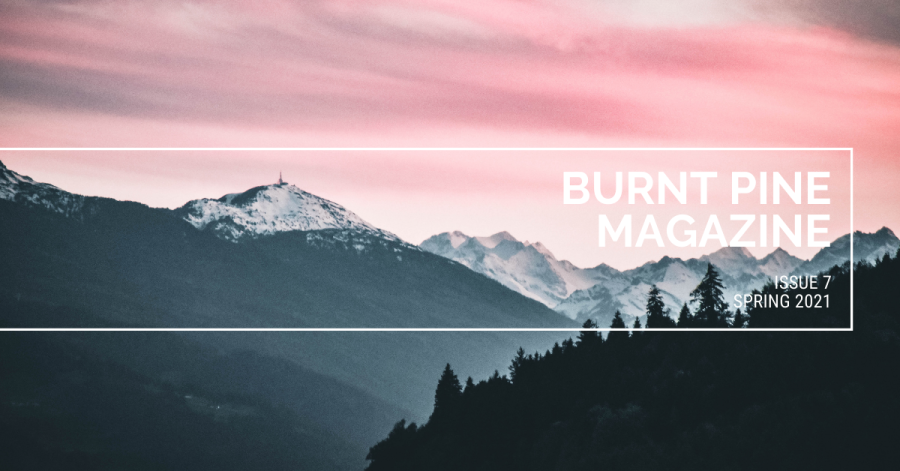 “I know what you’re thinking — I don’t belong here,” Sam speaks to the portrait above the bed as though the woman depicted in it is the central antagonist in his life’s story. She could be a passive-aggressive aunt, or a confrontational spouse he needs some time away from. “You want me to leave? Well, I want to leave too. Unfortunately, we’re stuck with each other for a while.” He hugs a towel close to his shower-damp body, modest under the gaze of her oil-painted eyes.

He’s considered taking Lady Grace down and stowing her in a closet, but — as with the wigs, hairbrushes, and tattered romance novels garnishing every surface in the house — he finds himself overtaken with a sense of Gran’s presence whenever he starts to make the change. Gran has been planted like a seed in the churchyard for three months now, and the house still brims with her not being there. He knows Gran would not abide gerrymandering the ancestors, so instead, he only drapes a citrus-hued afghan over the frame. He casts his towel on the floor, pulls on fresh clothes, and sighs at the seven-foot-tall foam and feather costume spread across the bed.

His father Mule had presented it to him in a cardboard box along with the proposal it be his daily work uniform. “If you’re serious about helping out around here,” Mule had said. Sam graduated top of his class from culinary school at Robert Morris University in Chicago. He ran a boutique gasthaus off of Michigan Avenue for ten years. Then he lost it.

Now, he begins a new career as a human billboard for his father’s Ohio Valley pizza parlor. Nothing is beneath him anymore. Chopped down to the roots, beneath is the only place he can go, pumping like mad through the humus of past affections and family obligation, seeking just enough sustenance to push him back into the light.

He squirms into the orange leggings and thumps one floppy webbed foot against the pine floor. Lady Grace’s afghan falls with a susurrus. “Stop kicking your covers off,” he scolds. He picks up the cover and works at fitting it more tightly around the corners of the frame. “You’re awfully active for a woman who’s been dead a hundred years. Spooky old crone.” One pale eye stares out from between the stitches. The house creaks and gives up the faint sound of footsteps.

Satisfied the Lady will bother him no more, he pulls on the rest of the chicken suit and peers through the small portal formed by the yawning polyester beak. The feathered cowl chafes his neck, and the lining tickles the old scar running the length of his jaw. The stale inside of the suit smells of the unknown actors who wore it before his father purchased it at the local Goodwill.

He still has trouble imagining himself day after day waving the grand seven-foot wingspan, dripping sweat on the lazy corner, and twirling a sign that says, “CHICK out our specials!” He wants a job in the kitchen, but Mule insists the kitchen isn’t where he needs help. Besides, what does it matter to a greasy spoon if a reviewer from the Tribune once called Sam’s hänchen-schnitzel sublime? They both know Mule doesn’t care about hänchen-schnitzel. He just wants Sam to eat crow.

The protruding beak narrows Sam’s field of vision like blinders on a horse. He cannot see and breathe simultaneously with the suit on, but he will have to dance. He hops, foot to foot, fighting the counter swing of the padded tail with every shift in balance. He shuffles to the left, then the right. He shakes his tail feathers, and, feeling confident, attempts a grapevine. Falling in a padded novelty poultry suit doesn’t hurt much but getting up is a bitch.

Perched on the edge of the bed, he pulls off the headpiece to catch his breath.  Sunlight filters through the curtains. The noises of the house come back to him, and he hears footsteps again, distinct and unhurried, in the kitchen. He can’t help checking over his shoulder to ensure Lady Grace still sits in her frame. (She does.) A series of raps come to him through the still air of the house, then the sound of a cabinet door banging. He sits up straighter. He hears more doors opening and closing, and the noise of someone rifling through the cupboards.

Despite the bulk of the suit, adrenaline propels him down the hall like an eagle in flight. He thinks fleetingly of his Pap’s gun, but he would not know how to shoot it even if he could find it. Should he confront the intruder? Run for the back door? The toaster oven dings.

With the realization that burglars don’t break for toast, Sam slows. He pokes his head around the door frame into the kitchen.

“Hey there.” His father glances up from fiddling with the toaster. “I see the suit fits.”

“How did you get in here with the door locked?”

Mule holds up a set of keys. “I’m the one who put your new locks on, remember?”

The coffee maker gives a cheerful belch and the smell of morning fills the kitchen. His father pours two cups and hands one to Sam before raising his own as if in a toast. “To being partners in the family business.”

Sam follows his father to the front porch and wedges the feathered back end of the costume into one of the rocking chairs. The field between the house and the road is turning green. On the far hillside across the gravel road, farmers in the Amish settlement work the fields. A killdeer pretends injury in the yard.

His father leans forward, as far forward as possible without pitching out of the rocker onto the porch deck. “See that girl there by the fence row? Who does she remind you of?”

The young woman is dressed plain, with a stiff kapp and a neat apron. Sam holds his breath as he scans her features. “She’s kinda far away, but from here she looks a little like —”

“Leah,” his father finishes. “at least, what I imagine she’d look like if she were still around.”

Lady Grace isn’t the only ghost in the house, then. Sam understands. A flick of blonde hair or the twitch of an angry nostril is usually enough to have him seeing his sister in the patrons of a restaurant or the strangers on the street. Natural, that their father should see her in this woman, who shares Leah’s build and arrow-straight posture.

“This girl’s name is Ruth. She lives over there.” Mule points. “Sometimes I see her where her community sells the produce and baked goods in that old barn off of 72. Tuesdays are my favorite — peanut butter cookie day.”

“I should never have let her get in the car —”

“It might change things between us if we could just talk.”

“There is no between us.” Mule sighs. “You think I blame you. I don’t blame you. But you left. We’d just lost one child, and when you took off, no warning and no communication, we lost the other. That’s the root of it.” He flings the rest of his coffee off the edge of the porch. Droplets arc through the air, shining like tourmaline in the sunlight. “This coffee tastes like turpentine. I don’t think the drip’s right on that machine.”

Inside, Sam lets the heap of bright yellow feathers fall to a pile on the floor. He starts the kettle and pulls a cast iron pan from a high shelf.  He sautés carrots and celery and onions, then covers them with water to simmer. When steam escapes like a furtive ghost from the kettle, he prepares his father’s coffee. He turns to take it out to the porch and finds his dad inside, an arm full of brown eggs from the chicken run.

“Actually —” Nostalgia hits Sam in the gut. For all his talents, all his successes, and all the recipes he’s tried, the homemade noodles his mother and grandmother made are the one thing he could never replicate. “I never learned how.”

“Let me help you.” Mule pulls one of the aprons off a hook on the wall and slips it over his head. “It’s all about the dough. Pass me the flour.” He cracks the eggs into a mixing bowl and adds salt. “Only enough flour that you can handle it without sticking all over your fingers. Don’t knead it any more than necessary to get it mixed together. You can’t measure it. You have to feel it.”

The contents of the bowl turn from sticky yellow paste to a soft flesh of dough. Sam watches his dad sprinkle it with flour and roll it out thin, handling it deferentially, almost as though it is alive. He slices the sheet of dough once in each direction and jelly rolls the stack made from the quarters. He passes the knife to his son. Sam shaves the noodles from the end of the roll and scatters them across the counter to rest.

“See these little bits that look like boogers?” Mule says. “We’ll put those in too. You want all of it. Makes the broth good.”

Sam washes out a rag to wipe the kitchen down with. “Do you have time to stay and have some? We can make a little something to go with them.”

From down the hall, Sam hears the flutter of the afghan dropping from the portrait. Lady Grace is wandering again. He doesn’t bother to leave his post in the kitchen beside Mule. He knows that in the time it takes to check for her empty frame, she will have returned, always watchful and almost smiling.

Janie Kronk is an architect, college instructor, and adult literacy tutor living in South Carolina. Her work has previously appeared in The Petigru Review and The Book Smuggler’s Den and is forthcoming in Stoneboat Literary Journal.